The story behind the poems

Most of these poems were written during a hospital stay of six months following a car accident. My right leg was in traction for most of that time, so I was confined to bed. I shared a room on the fourth floor with five others (most of whom stayed only a few days, so I had several dozen room-mates in my time there).

My bed was by a window looking out over St Kilda Road, one of Melbourne's busiest boulevardes. I could watch the world go by, but not be a part of it. I saw an anti-Viet Nam War protest march go past. Melbourne's West Gate Bridge, then under construction, collapsed while I was there, and one of the injured workers was put in my room.

I had a record player and records (this was 1970, before CDs), a tape recorder (open-reel; cassettes hadn't yet become popular), a radio, daily papers, and plenty of visitors; yet the outside world may as well have been light years away. I was cooped up in my own little world—one from which I could not escape.

All of the poems in this collection are Copyright © 1970-1971 and 1999-2010 Alien Son, and may not be reproduced in any way without the explicit consent of the author.

Some of the poems in this collection are humorous and some are serious, but each is an expression of “me” at a particular point. They reflect varied times, places, circumstances, and people—and states ranging from depression to joy. Each occupies its own niche in my life, but some of them express thoughts, opinions or feelings which are no longer relevant… except that they show me how I've changed.

Oh, in case you're wondering… there are no more. I never wrote anything else in this style; I guess these really were accidental.

Portrait of a Man

Have I The Right? 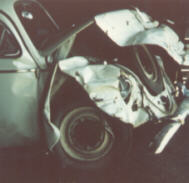 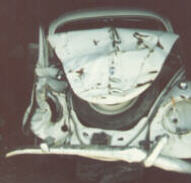 Two views of my VW Beetle, Herbie, after the accident that led to six months in hospital

My passenger received concussion and facial cuts as well as a whiplash injury when her head hit and shattered the windscreen. The buckle on her seat belt gave way in the impact. I had a fractured wrist caused by the steering wheel moving in and up, and a fractured leg caused by the front wheel moving back into the interior of the car. At the time wearing seat belts wasn't compulsory, and not many cars even had them fitted. I'm convinced the belts saved us from more serious injury or death, and I'm thankful that we were wearing them.

Me, taken sometime during my hospital stay